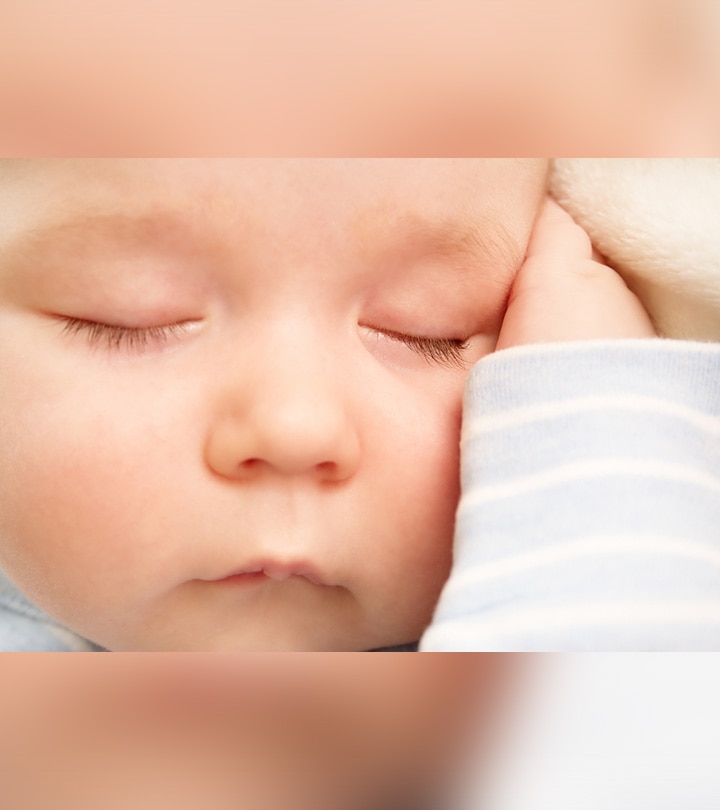 Congenital ptosis, also called congenital blepharoptosis, is a condition where a baby has droopy eyelids since birth. Eyelids can be droopy due to weakness of the muscle called levator palpebrae superioris, which normally elevates the eyelids. Droopy eyelids may not be visible immediately after birth in many babies and are often noticed after a few weeks or months.

Various reasons can cause congenital ptosis, and this can be a one-sided (unilateral) or both-sided(bilateral) defect. It may also affect both eyelids with or without symmetry. Surgical correction is warranted if the droopy eyelid affects the normal vision.

Read this post to know about the causes, symptoms, complications, diagnosis, and treatment of congenital ptosis in babies.

Other possible causes of congenital ptosis may include (2):

Babies can also have ptosis due to neurological conditions, such as third cranial nerve palsy, birth trauma, myasthenia gravis, and eyelid masses (periorbital tumors), since they can affect nerve and muscle functions of the eyes. This is called acquired ptosis and is often associated with double vision and other abnormalities.

Signs And Symptoms Of Ptosis In Babies

The drooping of the eyelid is the hallmark sign of congenital ptosis in babies. One or both eyelids can be involved. In addition, some babies may have increased tearing (watery eyes). Severe ptosis can interfere with a baby’s vision; the major part of the eye will be covered. It is also common for babies to raise their eyebrows while attempting to lift eyelids (3).

Babies may have abnormal head positions, such as lifting their head and chin up to see underneath the eyelids. If your baby has any signs of ptosis, seek a pediatrician consultation for a detailed diagnosis.

Droopy eyelids may result in the following problems in some babies (4).

If left untreated, abnormal head positions to see beneath the droopy eyelids can cause deformations of the head and neck in some babies over the years. Timely interventions can prevent these complications.

A complete eye examination can help identify ptosis and its complications in babies. History, vision assessment, refraction, head position, and eyelid position are assessed. Radiographic examinations such as CT scans or X-rays are not usually ordered (4).

Doctors may do follow-up examinations to look for complications and rule out neurological causes of ptosis. Babies may often get referred to various specialists, such as neurologists, depending on the underlying reasons.

Treatment For Ptosis In Babies

Mild ptosis that is not interfering with normal vision development may not require treatment. This should be evaluated and confirmed by a pediatric ophthalmologist. Babies with ptosis require regular monitoring to look for complications, such as deprivation amblyopia, since these cannot be reversed after age seven to ten years.

Ptosis treatment is warranted if the vision is impaired. Early medical therapies and surgeries may help to preserve vision (3). Some may opt for surgeries in late childhood or teenage even if the vision is normal since abnormal eyelid position can have negative psychosocial effects. Decreased field of vision and frontal headache can also be a reason for choosing eyelid correction surgeries later in life.

Congenital ptosis can be repaired using various surgical methods depending on the degree of eye muscle (levator) function and underlying problems. Functional restore is the primary goal of these surgeries. But surgeons may also consider contour, eyelid height, creases, and symmetry for cosmetic reasons.

Surgical procedures to correct ptosis may include the following (1).

Surgeons may often do procedures on both eyelids even though the baby has one-sidedptos is for symmetric appearance. Eyelid correction can be delayed if the baby has no vision impairment. Babies may require follow-ups after procedures to look for complications and improvements. Inflammation may occur in some cases due to implanted materials.

1. Does ptosis go away in babies?

Babies may not outgrow congenital ptosis. Surgical procedures are recommended to correct the droopy eyelids. Most babies can have normal vision development after correction. Repeated procedures may be required in the future if the levator muscle function is adequate.

2. Is congenital ptosis a disability?

The criteria for disability assessment may vary depending on the policies of each country. Ptosis may be considered a disability if it is impairing the vision. Therefore, you may ask the ophthalmologist to know whether your baby is eligible for a disability claim or not.

Ptosis cannot be prevented but, if detected in time, can be corrected with the appropriate treatment. Seek medical care if you notice droopy eyelids in your baby. You may discuss with the pediatrician to know the best procedure and treatment for your baby, depending on the severity of the defect and underlying causes.